This week, I applied with Google Adsense to convert my feed from Feedburner to Google. The process to do this is still manual, but fear not, you won't lose a single subscriber in the process. Both addresses continue to publish the feed, but itinye nri na Google nwere uru ego ebe ọ ga - enye gị ohere ịnweta Google Adsense maka faili ntanetịime. 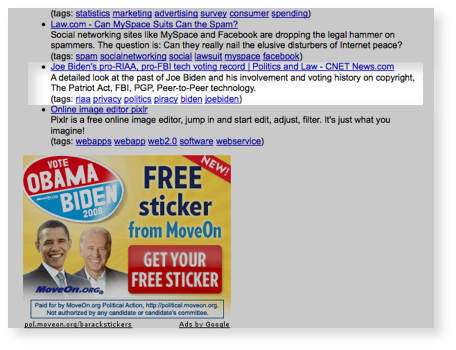 It's still not perfect, though! Take a look at the above ad from a radical political organization who paired up with my note about Joe Biden. The referenced article was actually a pretty scary look at Biden's 40 year history of voting with big brother and leaving the little guy out to hang.

I don't expect too much revenue from Adsense on the feed. Many folks are simply calling the program Webmaster Ọdịmma.